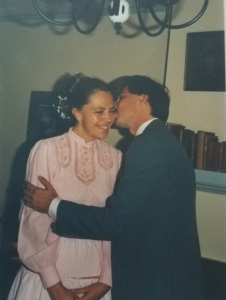 My sister died on Good Friday.

Late that same evening, in an attempt to distract myself from tending to my grief, I found myself googling, “What does it mean when you die on Good Friday?” According to Christian mythology, a person who dies on Good Friday gets a direct pass to Heaven. No reckoning, no bargaining with God, no judge and jury necessary. I laughed, which surprised me on such a sad day. You see, I don’t believe there are specific “places” called Heaven and Hell, but if there were, my sister Karen would surely get a FastPass to those pearly gates.

We humans tend to canonize those who die. We are quick to dismiss their earthly shortcomings and exalt them as saints. Most don’t deserve it, but a few do.

I was born the youngest of a family of seven. The surprise caboose at the tail end of a very long and drawn-out train of siblings. Family legend has told me the story of how my tired mother groaned at the thought of raising yet another child when she discovered she was pregnant at age 45. And how my sister Karen, already a young teenager, celebrated my birth, excited to have a new baby sister to fuss over.

My earliest childhood memories were with Karen. When our mom returned to full-time work not long after I was born, it was Karen who made sure I didn’t slip through the cracks. Late spring weekends spent feeding stale bread crusts to the ducks at Lake Steilacoom. Hazy summer afternoons on Spanaway Lake, taking a rowboat out for a paddle, followed by a picnic of tuna fish sandwiches and cream soda under the shade of tall fir trees. A special trip on my birthday to the downtown Tacoma Sears with its magical outdoor escalator to procure my very first pair of coveted navy blue salt-water sandals. Karen taught me how to count to ten in Spanish, French, German and Swedish. She took me to see “The Sound of Music” at an old downtown theater and earnestly sang the words to “Sixteen Going on Seventeen” as though she wrote the lyrics herself. And when she met and fell in love with her first serious boyfriend, she’d invite me to tag along with them, the three of us taking long, meandering drives in her gray Peugeot, much to her boyfriend’s chagrin.

I was a chubby, emotional child. Not especially cute, and prone to jealousy and crying jags that could come out of the blue. I often felt ashamed of my big, messy emotions and believed they made me hard to love. But Karen was my safe place, my soft place to fall. My Person. My surrogate mom in a family that I often felt swallowed up in. When Karen married that first boyfriend and quickly became pregnant with her first daughter–my niece–I watched my initial jealousy slowly morph into an understanding of the limitless capacity of the human heart to love.

Bad things happen to good people all the time. If there’s anything that makes me doubt my faith and the idea of karma, it’s that. From a rough first marriage to professional challenges to cancer diagnoses and so much more, Karen weathered more upheavals in her life than anyone deserves. “I don’t think my life has been any harder than anyone else’s,” she wrote after thanking us siblings for a gift of a long weekend getaway to the Washington Coast following her first round with cancer. What could often be mistaken for passivity was Karen’s quiet grace. I never once heard her complain or moan at the inequity of her life. Even as she struggled with the debilitating effects of chemotherapy and the ravages of cancer, she would shrug with a smile and comment, “Well, we all have to die someday.”

I was in my early twenties when Karen got me a job working beside her in the medical library at Rainer School in Buckley, Washington–a state institution for people with intellectual disabilities. She had always had a passion for helping special-needs children and adults and because of that, I quickly learned to see differently-abled people through a lens of acceptance rather than fear. We shared carpools and lunches and quiet afternoons cataloging medical journals and books. It was at Rainier where she met and fell in love with her second husband, Laurent. A natural-born mother with an enviable and instinctual sense of nurturing, she and Laurent went on to have two more daughters. Karen was never more alive than when she was mothering her children, and later, her grandchildren. Family was everything.

“You have a PhD in dying,” a friend texted me when learning of my sister’s death. She knew this past year had been rife with loss for me.

Natural causes. Heart attacks. Cancer. Suicide. Stroke. No Covid, interestingly enough, but does it really matter? (No, it doesn’t.) They weren’t all catastrophic losses to me, but some were. My mother-in-law. One of my dearest, most beloved friends. Colleagues of mine from my television days. Another friend who tossed her head back as she laughed and called us “soulmates” just months before her death. My sister.

While I have you here, can we talk a bit about grief?

Grief is not something to conquer. It is not an intimidating wall to scale, get over and be done with, but rather something we continuously move through for the rest of our lives. Sometimes it feels natural and effortless, as the floodgates open and the tears pour out after we first learn of the death. Inevitably, though, we encounter potholes and perilous cliffsides that stop us in our tracks. We timidly peer over, unsure we have what it takes to keep moving. It is hard, exhausting, vital work that does not follow a linear track. Human nature makes us want to stuff down, cover up, distract, deny, diminish and ignore the pain. The easy route is to abandon the process of mourning when the going gets tough. I get it–it’s messy and uncomfortable. Our grief will make others squirm. But here’s what I’ve learned: the losses we suffer stay with us, as does the accompanying grief. It won’t always feel so breathtakingly painful, but grief remains as it changes shape and form, flavor and intensity. To fully mourn someone’s death is to fully honor their life.

A non-exhaustive list of things NOT to say to someone who is grieving:

“They (the dead) wouldn’t want you to feel sad.” (This is especially egregious when the person telling you this never knew the deceased.)

“They’re in a better place.” (Really? Even if this is true, it doesn’t help to hear.)

“Don’t be sad it happened (the death), but smile because you knew them.” (Fuck the hell all the way off if you recite mindless platitudes you gleaned off the internet.)

“They’re walking with Jesus now.” (Don’t. Even if you know their faith. Just don’t.)

“Well, they lived a long life and they were old.” (Someone I considered a friend said this to me with a dismissive shrug after my dad died. My first significant loss. I don’t consider her a friend any longer.)

That’s it. Simple. To hold quiet space for someone in mourning is sacred work.

Our culture does not normalize death and dying. The dying are tucked away, often unseen. Have you ever seen a dead person? Not the artificially embalmed and displayed in an open casket, but a real dead person? An actively dying person can look withered and older beyond their years and it can be shocking to witness, if we’re not prepared. After the death, we are urged to “get over it” and applauded if we quickly pull ourselves up and out by our bootstraps and carry on as though nothing happened. I have long admired the Jewish custom of “Sitting Shiva”–a week long period of intentional mourning following a loved one’s death. During this time, family members traditionally gather in one home to receive visitors. The word “shiva” means seven, signifying the seven-day mourning period in which mourners are supposed to sit low to the ground. On the seventh day of Shiva, mourners conclude the practice by taking a walk around the block, symbolizing the return back to regular life.

As I write this, today is the eighth day following Karen’s death. Her first granddaughter, Poppy, was born the day before Karen died. Birth and death intermingling, teetering together on the razor-thin edge of life. I am not one of unwavering faith and conviction, but I like the idea that Karen and Poppy met somewhere in the In Between. I like to lean into the mysteries of life and death and the comfort it gives me.

My sister died on Good Friday. I don’t know what happens after we die, but I am confident that Karen would not have needed a free pass on Good Friday to ensure a positive transition into The Other. I wrote this to her for a birthday celebration her family threw for her just a few years ago:

“When I think of Karen, I envision her in shades of her favorite jewel tones—amethyst, sapphire and emerald green. She’s dancing and singing along to the soundtrack from “Candide” or maybe onstage with her family, creating a dance party for others. One thing I know for sure is this: in a world full of nondescript stones in muted shades of gray, Karen is that delightful surprise of a shimmering gem you uncover just when you least expect it. And if you’re lucky, she’ll make you a fantastic tuna fish sandwich.”

This one hurts. I’m gonna be sad for awhile. 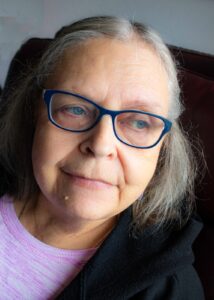 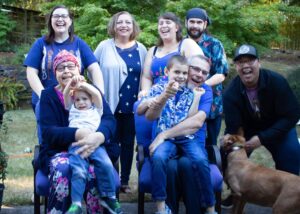 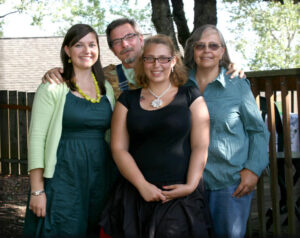