I was driving south on I-5, dressed in my purple and blue paisley hippie-dippy-flowy blouse and knee-high black boots that laced up to there when traffic slowed to a stop. Damn, I thought. I had places to be. The Showbox, specifically. Prince was in town, for cryin’ out loud, and I swore I could smell him from my little red Prius, stuck at a standstill on the Ship Canal Bridge. (Just for the record, I’ve always imagined Prince smelling of exotic musk and spice with just a hint of patchouli.)

My phone rang. It was my college kid. “Hey, I’m on my way to the Prince show!” I exclaimed. We share this deep love of music and live shows, my kids and I, so although the college kid retorted with some snarky comment about the price of my ticket being almost as much as a ticket to Coachella, I could tell he was excited for me. “Yeah, I’m just gonna get a good spot up in one of the bars,” I told him. “There’s good sight-lines to the stage from there.”

“WHAT? ARE YOU KIDDING ME?” he seemed to shout. “You pay that much money to see this artist you loved all your life and you’re gonna just go sit up in the bar somewhere? You’re nuts.”

It’s not the first time he’s told me this. The nuts part, I mean.

I mumbled something about being old and my feet maybe hurting and finally conceded he might have a point. “We’ll see,” I said. Traffic began moving again, so we said goodbye and hung up.

The line to the Showbox snaked around the corner but I felt pleased with my place in the queue. Once inside, I made a beeline to the bathroom and then the bar. “A double,” I ordered, knowing I would be nursing this one and only drink for the night. There was no way I would be relinquishing my spot in the crowd once I had hunkered down.

Hearing my college kid’s voice in my head, I stepped down from the bar onto the floor in front of the stage. Surprisingly, only a smattering of fans had assembled there. A single microphone, bathed in a beam of purple spotlight, stood not more than twenty feet from where I landed. Oh, holy hell, I thought, imagining Prince’s face at that microphone in such close proximity to mine. Barking dogs be damned. I wasn’t moving. This is why I do yoga. Strength and endurance to ensure I was eye-to-eye with The Purple One.

I took a picture of the microphone onstage to send to my college kid, hoping he was proud that his mom had made a good choice.

A good choice, indeed. I wish I could adequately describe for you the majesty of that night. The power of Prince’s performance. And yes, the thrill of locking eyes with the man who had supplied the soundtrack to my life, decade after decade, as he sang and smirked and hip-swiveled his way through the electrifying set that night.

I would have paid a thousand dollars for that experience.

It was that kid of mine, no longer in college, who first texted me the news about a death at Paisley Park Studios yesterday morning. There was no other mention of it anywhere on the internet, but within a half an hour, Prince’s passing was confirmed.

I haven’t really cried yet. It hasn’t begun to sink in. All the tributes, the non-stop Prince playlists, the social media posts–they’re nice and all, but I can’t take it in like that. Not yet anyway. It feels personal and my grief needs a personal place in which to be processed. I’m not quite sure where or how, but maybe this–this writing, is a start.

The day after the show, I thanked my kid for reminding me of what was important. For the metaphorical bitch-slap he handed me in the middle of I-5 that afternoon. For the lesson that life is not meant to be lived sitting back in the bar, but instead, front and center to whatever it is that makes your toes curl.

As I wrote this, I searched for that photo I took–the one of the microphone bathed in a single purple spotlight, but couldn’t find it. I imagine it was out-of-focus and I had deleted it without giving it a second thought. But I did find this one–my knee-high boots that laced up to there from that extraordinary night three years ago.

The very ones that got me out of the bar and took me not more than twenty feet from the man who supplied the soundtrack to my life. 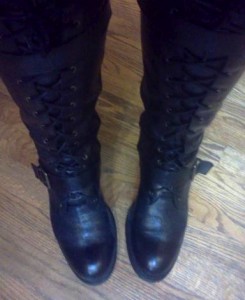